What year did you spin the last bobbin of yarn in France?

Having already established our factory in Poland at the end of the nineties, we wanted to continue the production in France while all the linen spinning factories in West Europe were closing one after another.

However, the acceleration of globalisation with the rapidly growing power of China, withdrawal of quota for the import of Chinese products to Europe which were to flood the market with yarn prices twice lower than ours, all this unfortunately led to a decision to stop operating the factory in France, where the last reel was spun in Sailly-Sur-La-Lys in 2005.

Why do you want to reopen a spinning factory in France?

For many years, some of our industrial clients, several brands and even consumers were surprised that such a noble fiber is no longer spun in its traditional growing territory. We also observe a change of the paradigm in the consumption codes and in the consumer expectations, in terms of environmental as well as social footprint, as well as growing requirement for the products to be traceable and local. A growing number of brands want to address these new but deeply-rooted expectations and the linen seems to be the answer. It would be also necessary to build a value chain in the area and Safilin, being the most recognised among the linen spinning companies, was invited to work on this project and decided to take part in it.

It will not be a relocation but a new tool in France, accompanying our growth. In fact, we are going to further support our plant and our employees in Poland, where the production satisfies the European, as well as the Japanese demand, whereas the new factory in France will bring a complementary offer addressed to brands that want to propose their clients a product that was 100% processed in France, from the plant to the finished product. This new capacity will represent 10% of the production capacity in Poland and will address these new markets. 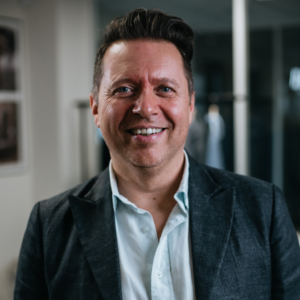 Where will the factory be situated and what reasons motivated this choice?

Safilin has always been attached to the region where we were first established in 1778, that is Hauts-de-France. What is more, Hauts-de-France manufactures and processes 35% of the French linen and various actors of the textile chain are based in its territory, from agriculture to scutching, from weaving to finishing and manufacturing. Some of them will contribute to our activity as service providers, suppliers and clients, therefore the location in Hauts-de-France is fully justified.

How do you plan the relocation to take place?

We have collected in advance the original spinning equipment from closed fellow factories, being the only one guaranteeing a good level of quality. This equipment is currently being renovated – we are regulating the machines to work like a Swiss clock – and they will be transferred and installed in France in the upcoming months.

As for preparation of employees, the spinner’s profession has completely vanished from the territory and we need to reintroduce these competences. As at the beginning of the nineties, when the competences were transferred from France to Poland, we are going to do a reverse operation, as our Polish instructors are happy to contribute to the training of our future spinners in France. In their enthusiasm, we see their pride and the spirit of mutual support. We are going to live a truly beautiful story, both from the industrial and the human point of view. 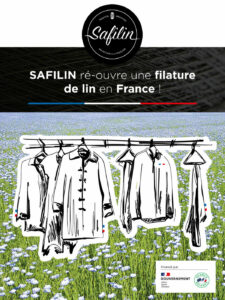 How many people will work at the factory?

We are planning to hire 30 persons at the end of 2021, and they will be charged with the first phase of installation of the factory; we already plan to offer 20 supplementary jobs within 3 years following the factory start up. In today’s context, it is the Safilin’s contribution to create new jobs that we need.

What will be the quantity of the produced linen?

Eventually, we plan to manufacture 350 tons of yarn annually. We are going to reintroduce to France 2 spinning technologies intended especially for linen and that we specialise in :

– wet spinning, used for such applications as fashion, table/bed linen, already in high demand, at the level of 200 tons annually

– dry spinning, for larger and more rustic yarn, to support manufacturers of furniture fabrics in their evolution towards a more eco-responsible offer.

To whom is this relocation addressed?

Eventually, if we leave out the industrial process, this plant will satisfy the needs of consumers who not only want to buy a beautiful, comfortable, natural and lasting garment, but who also see the purchasing act as their true citizen’s “vote”.